After the success of his ‘Got Fight?’ book which hit the New York Times best-sellers list last year, former UFC light-heavyweight champion Forrest Griffin is now gearing up for his second offering.

His new book, titled Be Ready When the Sh*t Goes Down: A Survival Guide to the Apocalypse will be released in stores on August 17th.  Here’s the publisher’s description of the title.

“In “Got Fight?”, Forrest Griffin and Erich Krauss unleashed their unique brand of humor teaching people how to get tough and become a man. Now in the sequel to their bestselling book, Griffin and Krauss teach people the ultimate form of manliness: surviving the coming apocalypse (it’s gotta come soon, so you might as well be ready). For years, Forrest Griffin has been waiting anxiously to find himself in a post-apocalyptic future. Why’s he so excited about the near-extinction of mankind? Think about it: with grooming an personal hygiene no longer a prerequisite to social acceptance, you can let your mutton chops grow and live out your secret fantasy of becoming Wolverine. You could kill squirrels with your bare hands, practice throwing knives all day, and never have to say ‘excuse me’ after farting. With actual survival tips, illustrations, and photos of Forrest showing off his wilderness, this book is a survival guide for everyone who thinks that the end is near and wants to embrace it rather than running for the hills. From eating in the wild to fighting dirty in a world that looks like Mad Max, this book is for people who look forward to the end of the world because it will allow them to stop wearing pants once and for all.”

And here’s Forrest hamming it up on the front cover of said book: 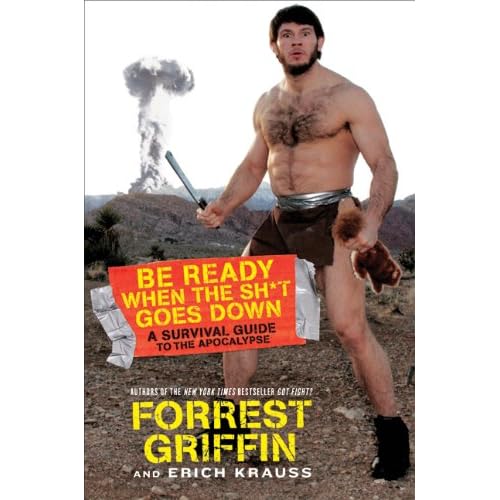 The book is available to pre-order now from Amazon.

Injury-jinxed flyweight Tatiana Suarez won't be making her comeback at UFC 266 on September 25th against Roxanne Modafferi after suffering another setback. "I sustained a...
Read more
MMA & UFC NEWS

UFC On ESPN 28 has been ravaged by call-offs in recent days, with the latest fighter to pull out being Mounir Lazzez. Due to the...
Read more
MMA & UFC NEWS

Conor McGregor Has cruelly referenced Khabib Nurmagomedov's dead father in a post on social media as he continues to cast himself in a negative...
Read more
MMA & UFC NEWS

UFC On ESPN 28 Takes Another Hit As Sam Alvey vs. Roman Kopylov Is Scrapped

UFC On ESPN 28 has taken it's second hit in short order with the news that a main card fight between Sam Alvey and...
Read more

UFC 265 Lewis vs. Gane: Heavyweight Titans Duke It Out for the Interim Championship

Miesha Tate Ready To Face Anyone After Successful Comeback Fight