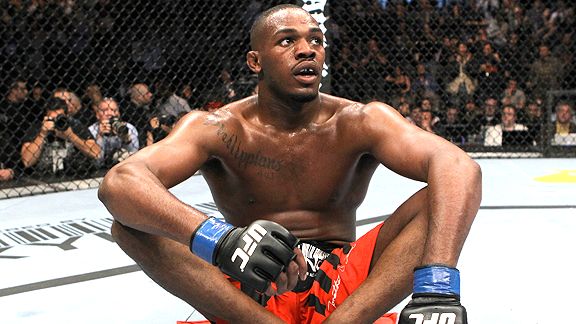 1.) Lack of Finishes/Change In Fighting Strategy:

This may seem like a meticulous gripe on the surface, but when the details of the situation become fleshed out, there are some aspects to consider here. After all, Jones has not finished a fight since he stopped Chael Sonnen at UFC 159 in April 2013. He also submitted Vitor Belfort in his prior fight at UFC 154 in October 2012, and those facts bring to light some major significance.

Why, you ask? Well, it’s because Jones’ most recent finishes were formerly marquee (and recycled) victims of Anderson Silva, the man most would directly compare Jones to when talking about whom is the greatest of all time. They also fought predominantly at middleweight.

That’s not to knock Jones’ level of competition, because it’s clear that his dominant run of 2011-2012 will most likely never be repeated. He finished Ryan Bader, Shogun Rua, Rampage Jackson, and Lyoto Machida before beating Rashad Evans by decision and finishing Belfort and Sonnen.

That was an historic run through some of the best fighters the UFC has ever seen, and it’s only natural that Jones lost some of the killer instinct that skyrocketed him to the top as an up-and-coming young fighter. It happens to everyone who’s ever been in his position, at least to some degree.

An increase in competition in recent bouts with Gustafsson and Cormier has made it tougher to finish his opponent, but it simply can’t be denied that Jones has tailored his strategy to a safer style that adapts his gameplan to his opponents’ weaknesses to pick up the win as efficiently (and perhaps safely) as possible.

Is it a smart strategy? Without a doubt. Could it one day lead to Jones losing his belt? Tough to say, but it is a definite possibility.

At the end of the day, Jones isn’t going for the emphatic victory that he once did. Too much is at stake. And for that reason, we may have seen the beginning of the end of Jones as a ruthless finisher.