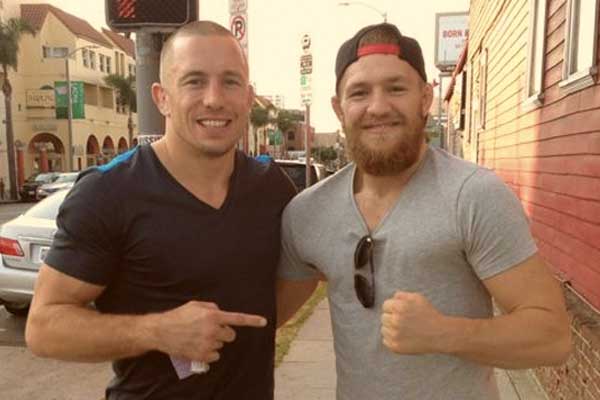 Retired UFC star Georges St-Pierre has stated his belief that Conor McGregor’s skills have deteriorated in recent times and has suggested that he should avoid yet another fight with his rival Dustin Poirier when he does finally recover from the broken leg he suffered last time out.

“If he comes back… If I’m his manager, I don’t want my client to come back to fight the same guy again for the fourth time,” GSP told mmafighting.com. “Because now it seems like Dustin has his number,” St-Pierre told MMA Fighting. “He need to perhaps take another fight.

“I think he should comeback and maybe fight Nate Diaz or someone else that has a different style than Dustin Poirier. Because styles make fights and I have the feeling that now Dustin Poirier probably has his number right now.

“Conor’s been out for a long time. He needs to get back in there to spend more time in the Octagon, in order to find his own self, the way he moves, and his ability. It seems like he might have lost some of his ability, due to his inactivity.”

it’s a reasonable opinion to have and as you’d expect from GSP there’s no trash-talk here, but you have to now wonder if the former two division champion is now going to be the latest star to come under-fire from McGregor, who has recently been feuding with anyone who dares say anything negative about him, from Daniel Cormier to Michael Bisping.

Meanwhile, McGregor has shown video footage of him on an exercise bike as he claims that he’s ahead of schedule in his recovery, though even if that’s the case it’s still going to be next year before he’d be able to get back into the Octagon and try to dig himself out of his losing streak.