There are many reasons for Cat Zingano to loathe life and there are some days when life seem to loathe her back. The past nine years she had endured more than a fair of physical and psychological trauma. Any one of the misfortune Zingano had suffered would have crippled many other lesser beings for an extended period of time. Yet one setback after another, the world finds her back on her feet, stronger, better, fiercer.

In 2006, at the tender age of 24, as a highly decorated wrestler, confronted by pregnancy and life as a single mother, Zingano had to take a step back in her athletic career, an activity that had kept her focus for many years since she was a troubled teenager. Within that same year, Zingano lost her mother. Instead of winding down into semi-retirement as a suburban mum, she took on one of the most gruelling sport in the world – cage fighting and became a professional fighter by 2008. Zingano was the first UFC fighter that is also a mother. After clawing her way slowly but steadily up the rankings of female MMA fighters, Zingano find herself in the Octagon with Meisha Tate in April 2013 to compete for a highly coveted spot to challenge the long-time Bantamweight champion Ronda Rousey. It was not an easy win, Meisha Tate as an old timer put a huge amount of pressure on Zingano dominating a large part of the fight. Zingano fought through the first two rounds with great effort to emerge as a winner in the third round through superior stamina and striking skills.

Alas, Zingano’s victorious state was short lived. She suffered an serious knee injury a month later, tearing her ACL. It put her out of action for over a year. Physical hardship was not the only blow she had to withstand. In January 2014, her husband and coach of many years committed suicide. Plenty of athletics would call it quits after such a violent injury and emotional grief. Zingano, instead because one of UFC’s top ‘comeback kid’, returning to a fight 532 days later. She returned to action in Sep 2014 fighting Amanda Nunes with an incredibly tough fight. Not unlike the fight with Tate, her opponent Nunes owned the first two rounds. Nonetheless Zingano came through triumphant yet again in a UFC fight, bringing her undefeated record to 9-0. 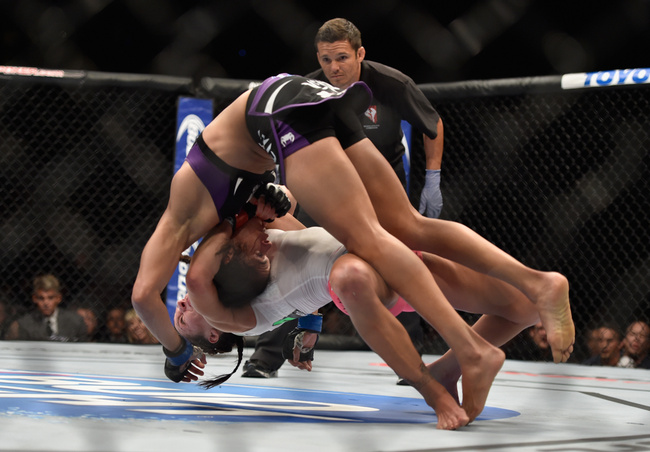 In UFC 184 set for 28th Feb, Zingano and Rousey will both participate in a match where only one fighter will keep their perfect no-loss record. The unspoken atmosphere is that Zingano is the underdog; shortly after her qualifying fight with Meisha Tate in April 2013 was released by UFC on You Tube a wave of comments were posted on the video by all kinds of soothsayers mostly predicting an easy win by Rousey.

The odds are indeed against her. First, Rousey had defeated Tate convincingly twice in the past inside of three rounds, but Tate managed to put Zingano in numerous compromising positions throughout the first two rounds of their bout. Second, Zingano usually wins through resilience and outlasting her opponents. Most of Rousey’s opponent do not get a chance at the second round and it is through her impeccable technique and timing that terminates the fight so efficiently each time. While Zingano is a skilled fighter there are doubt to her level of precision to equate Rousey.

Regardless, Zingano is no stranger to being the condemned. If her past is anything to go by, Cat Zingano is exactly the kind of person to defy adversity and rise to the top. The long anticipated clash will finally reveal all in 2 weeks time.