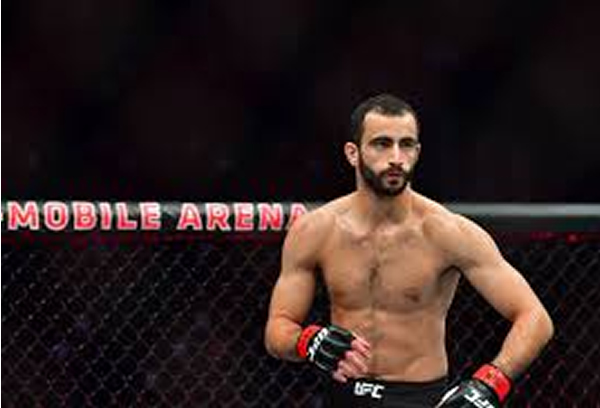 Giga Chikadze was in terrific form tonight at UFC On ESPN 30 as he outstruck Edson Barboza in a technical stand-up battle on his way to a third round TKO victory.

Low kick for Chikadze and Barboza reaches trying to land one of his own in response. Another attempt at a leg kick from the Brazilian, but no clean connection yet.

Calf kick from Barboza is checked. Head kick attempt from Chikadze. Barboza steps into a punch and Chikadze just missed with a flying knee to the head.

Heavy leg kick for Barboza. He misses on the punch behind it. Jab for Chikadze and then a kick. He tries for another one and it gets checked by Barboza.

Barboza unleashes punches, but still finding his range. Spinning kick to the body from Chikadze. Exchange of hooks.

Chikadze rushes into a punch, but then stumbles backwards afterwards. Body kick for Barboza. Head kick attempt from Chikadze is blocked. He tries another kick and lands to the body. He works for a punch too then more body kicks.

Chikadze with significant volume here as he puts the pressure on Barboza. Solid right hand from Chikadze. Now a body kick. Punches and another body kick. Misses with a head kick. Big offense from Chikadze late in the round there and Barboza wasn’t getting much off in return.

Inside leg kick for Chikadze. Front kick to the body from Chikadze. Right hand for Barboza. Body kick from Barboza.

Jab for Chikadze. He lands it again on the outside. Now a solid calf kick. He lands that again. Barboza trying to pressure, but not letting his strikes go as often.

Stepping punch for Chikadze. Now a kick and then a stepping punch again. Right hand for Barboza. Now a body kick.

Hard calf kick for Barboza now. Punch and then a kick from Chikadze that just grazed over his opponent’s head.

Chikadze with a body punch. Side kick to the knee from Chikadze. Hard body punch from Barboza. Chikadze kick is checked.

Head kick from Barboza almost got through. Barboza punches to the body. Jab gets through for Chikadze.

Chikadze with a few straight punches that come off the guard of Barboza. Barboza constantly trying to close off Chikadze. Calf kick lands again for Barboza.

Front kick to the body from Barboza. Jab for Chikadze and a leg kick from Chikadze.

Chikadze lands a big knee to the body. Barboza backing up and Chikadze lands a clean punch. He connects again and rocks Barboza, who tries to keep his balance and then stumbles to the mat under fire.

Barboza trying to work a possible leg lock on the mat, but Chikadze avoids it and now he’s working a choke. Barboza scrambles out of that, but as he gets back to his feet Chikadze immediately blasts him with big punches and floors him again, which leads to the fight ending by TKO at 1.44mins of the third round.

Huge win for Chikadze that showed off his kickboxing credentials to their fullest against a similarly high-level technical striker and now sets him up as a leading player at 145lbs.