I, like many, used to think that the women’s division was shallow and that’s why Ronda looked so good. After that 14 second display of beauty I think differently. Everyone else has very competitive matches. Cat Zingano vs Miesha Tate and Zingano vs Amanda Nunes were excellent matches. Rousey is what Olympic level technique looks like. Breaking down the fight Ronda is in charge from the very beginning. As soon as Cat goes for the head and arm takedown, Ronda is balancing on one leg ready to push off to change momentum, 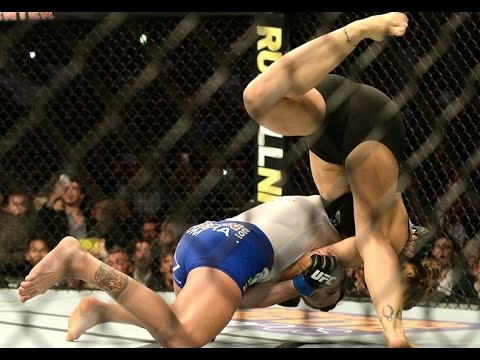 then flip Cat over.

After flipping her, over she immediately steps over.

She had the bottom arm secured then switched to the top arm. I highly suggest watching that hip switch in slow motion a couple of times. It is a display of perfect technique and insane speed. Then the squeeze, she knows exactly where and in what direction to put pressure. After Bethe Corriea and Holly Holm Ronda needs to test out the waters at 145.  Maybe not a fight with Cyborg right off the bat, but if she wins her 145 debut it would be a possibility. Without Ronda the women’s bantamweight division would be very competitive.