To be Tiny (and creepy)

It is the last adjective that any men voluntarily use to describe themselves. Yet Ian “Uncle Creepy” McCall famously said “…its like small person-ism. No one really gives a s–t about us, it’s true.”

To put things into perspective, Ian McCall is 1.65 metres tall and his official weight is 56.7kg. That puts him a shade shorter and 10kg lighter than Jet Li when he was still active in the martial arts film making business. While Jet Li was never fighter in a competitive capacity, he was beautifully skilled in display martial arts winning national championships in China (imagine being number one in a country of over 1 billion people) since he was 11 years old. This should give hope that one can be tiny but deliver a dynamic presence that captivates the audience. 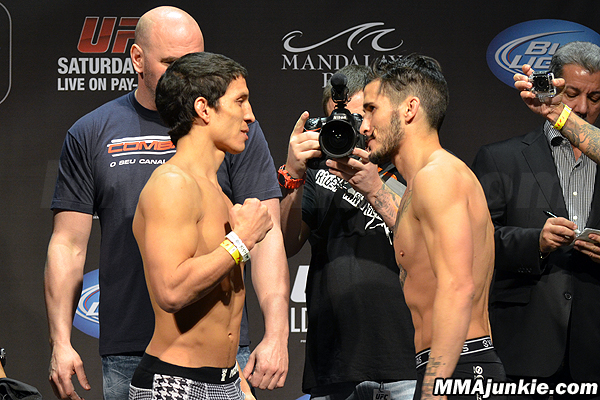 As of Jan 2014, Ian McCall is #3 in official UFC flyweight rankings. He is working his way up to a title shot and would like to be a UFC champion. His crusade begins Jan 31 2015 UFC 183 vs John Lineker.

Cheyanne Vlismas emerged with a unanimous decision win over Mallory Martin and a 'Fight Of The Night' bonus to go along with it last...
Read more
MMA & UFC NEWS

The UFC On ESPN 31 post-fight press conference will soon start in Las Vegas and you can watch it live via the video below. https://www.youtube.com/watch?v=xMeDRQVQw6k
Read more
MMA & UFC NEWS

Jose Aldo extended his winning streak to three fights tonight at UFC On ESPN 31 with a hard-fought but convincing unanimous decision win over...
Read more

Diego Sanchez In Hospital Due To Serious Covid Complications

Frank Mir Says Next Triller Fight Will Be His Biggest Payday